Guitar amplification technology has been evolving at a steady pace for a long time before a quantum leap was achieved. In the old days, you had to spend a decent amount of money to get an amp in the first place, and all of them were tube amps as well. Then digital technologies started taking charge and the industry got flipped upside down.

However, solid state technology never managed to topple the tubes for the title of absolute best in guitar amplification. Tubes still hold the throne. With that said, each of these vastly different technologies has its pros and cons which you need to know about if you’re setting out to shop for guitar amps. Today we will talk about the difference between these two types and talk about what each of them has to offer.

Tube amps are the old-school way of providing guitar amplification. The whole nature of these amps, and the reason why they are called ‘tube amps’ is because they rely on vacuum tubes to ensure power and preamp output of the whole amp. It’s a known fact that tube amps simply sound more organic than their young counterparts. There is a special type of warmth related to the sound of tube based amplifier that solid-state ones will probably never fully achieve.

The proof for this statement can be found on just about any world-famous rock band stage. Next time you go to a concert, pay attention to the background of the stage. Chances are you will see a whole bunch of tube amps being stacked in a place where they don’t bother anyone.

Tube amp stacks are almost a written rule for anyone wanting to get into big leagues. If you need a comparison between a stack amp and a combo, check out this article. What really makes tube amps so attractive is the natural occurring overdrive.

Every guitar player is familiar with this type of effect, that is for sure. Most also know that distortion and overdrive both came from what is essentially a failure of the vacuum tubes in a tube amp. The whole thing revolves around the fact that tubes can take only so much gain and power before they start decaying in terms of tone quality.

This signal decay is what a basic overdrive is, and how it got invented. With all that said, let’s take a look at some of the disadvantages of owning a tube amp. First and foremost, they are very expensive. the lowest amount of money you will need for a decent tube amp will be around $500 or so, and those are the underpowered practice amps as well. If you want to hit the big leagues, you need to be prepared to spend a lot more than that. 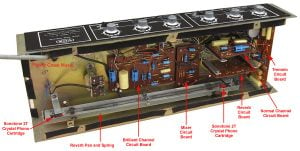 On the opposite end of the ring, we find solid state amps. These are essentially entirely different beasts than the tube amps. A solid state amplifier won’t sound as good as a good tube amp, but the number of benefits you get by going to a solid state amp is immense. The easiest way to differentiate them is to know that tube amps are analog and solid states are digital. Since modern day electronics are easy and inexpensive to produce, we have a whole lot of great amps that can be bought at dirt cheap prices.

Would you want to gig on a solid state amp? Sure, but it will never give you the type of experience a good tube amp can. Since the digital approach is all about versatility and function, solid state amps come packed with features. Not only do they have a very reasonable sound in general, but solid state amps are also capable of emulating other amps on the market.

That’s why solid state combo amps are so popular among beginners and budget guitar players. They simply offer so much at a very reasonable price. If you’d like to see which solid state amp is currently dominating that segment of the market, click here: and you will get a far better picture about the whole thing.

The best thing about this technology is that it’s constantly evolving. Maybe one day we will see a complete tube amp emulation that sounds exactly like the original.

So what does all of this mean for you? Well, if you are capable of being objective when it come to choosing an amp, a solid state will give you the best bang for the buck while a tube amp will definitely put a dent in your finances. With that said, there is still nothing like a good set of tube amplifiers. Solid states are great for band practice as well, seeing how they are lightweight compared to tube amps.

Which one of these two you will end up choosing depends on your needs and your budget. If you are tight on the money, it’s far better to go for a cheaper solid state amp and spend the remaining money on something else that is important. We hope you’ve learned something new here and now have a clear image on the difference between tube amps and solid state models. Now get to practice!