Orange amps are known for one thing more than anything else, and that is a killer overdrive. Their dirty channels are in a category of their own. However, that is mostly attributed to their tube rigs rather than solid states. With that in mind, it’s not all that unreasonable for many people to wonder whether their solid states can keep up. Orange Amplifiers Crush 35RT answers that question perfectly. For less than $300, this is one of the most competitive amps out there. Let’s find out why. In terms of controls, Orange pretty much stuck to their well-known layout. However, they did introduce one change that makes this amp a bit different from any other out there. Since it has two channels, they haven’t actually used a button to allow you to toggle channels. No, instead they went with a knob for each. In a way, you can mix both channels and create some pretty awesome results. Aside from that, you are presented with a three-band EQ, gain and reverb control. The only thing that is activated by a button is an onboard tuner. Despite being somewhat odd, the controls on this Orange amp are pretty intuitive once you figure them out. 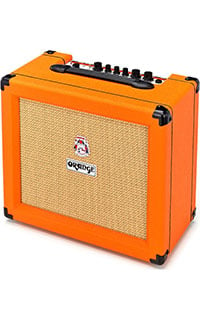 Looking at the features of the Crush35RT, it is not too hard to figure out that Orange wanted to design an old school practice amp. By that, we mean a simple dirty/clean channel configuration with an onboard reverb. However, its features don’t end there. Aside from the built-in tuner, we have mentioned earlier, you also get Orange’s cab emulation. This thing offers 35 Watts of power being pushed through a single 10 Inch speaker. The signal to the speaker is routed through their CabSim cluster that essentially emulates a 4×12 Inch cabinet. On paper, it doesn’t sound like much. However, once you hit that On switch, you are definitely going to be surprised at just how good of a job they have done.

Playing around with the Crush 35RT reveals what we have already expected. In other words, a pretty basic clean channel that is somewhat limited in scope, but a pretty outrageous dirty channel. Once you roll off that dirty knob, what comes out is pure bliss. Especially combined with the CabSim technology. If you dial it right, you can get that stack tone many are trying to achieve. This sort of unusual nature makes Crush 35RT a rather versatile little amp. It more than enough power to serve as a practice or studio amp, but some will find it pretty useful for gigging as well. The only thing that is
really missing here is a speaker line out. That alone would have made this an unbeatable model in its price range.

Orange Amplifiers are pretty set in their ways. With that said, no one can really blame them. Their formula has worked for a pretty long time, giving them absolutely no reason to change anything significantly. Crush 35RT was a successful effort to translate that formula over to the solid state side of the industry. If you are looking for a killer practice amp to use at home or in a studio, Orange Amplifiers Crush 35T should be on your short list.